I have an awesome job, an awesome manager and I work for one of the best companies around.

On Monday October 2nd I will join Amazon Web Services as a Principal Solutions Architect.

This was not a decision I took lightly.

This blog post (in its original draft) was 7 pages long. I intended to explain, at a certain level of details, the thought process I went through to take this decision.

I eventually figured that this was just (psychologically) useful to myself and there was a chance my blog readers would be bored about it. So now you get to see only the final result and not “the 7 pages sausage making thought process”. You’re welcome.

A bit of background about me

I worked at IBM in various positions since 1994 but pretty much on x86 architectures. I started with OS/2, moved onto Windows and eventually I joined the Systems and Technology Group working on the Netfinity line of Intel based servers (soon to become eServer xSeries).

I was in Redmond for a Windows 2000 Datacenter training at Microsoft when I stopped by the IBM facility in Kirkland. I spent time talking to Bob Stephens, one of the big guys there. Bob was telling me about this huge scale up big server (the xSeries 440) that was so big… that nobody really wanted/needed it.

At that point, he said they were in talks with this small startup in Silicon Valley that was working on a thin software layer that you could install on this server and that would allow a user to carve out “small software partitions” (for lack of better wording at that time) where customers could install Windows.

I distinctly remember that I chuckled at Bob’s whiteboarding and the first words that came out of my mouths were “come on Bob, are you kidding? A software layer between Windows and the hardware? This will never work!”.

Bob acknowledged my concerns and handed me a CD with a label on it: “ESX”. He suggested I gave it a try.

Next week I got back to the office in Milan, booted that CD, installed ESX 1.0 onto my xSeries 440 in the lab and I distinctly remember I chuckled (again) and said to myself “Holy moly, this thing is going to change the world entirely forever”. And it did.

The rest is history.

I have been working exclusively on VMware technologies since 2001.

I guess it’s fair to say I have seen it all from ESX 1.0 all the way to what VMware is today.

Why am I leaving VMware?

There isn’t any reason other than, after 17 years, I feel the need for a professional change. VMware is an amazing company and one I could have easily retired at still having fun (which is a priority for me).

Having that said, in the last few years, it’s grown in me the desire to expand my reach into different technology areas, different communities and embrace different cultures (more on this later). In other words, see something different from different perspectives.

VMware has always been amazing to me (both when I was a partner at IBM and an employee at VMware). I only hope I was able to pay my debt with my contributions during the last 17 years.

I will forever be grateful to the company and the community.

Why am I joining Amazon (Web Services)?

As I watched industry trends and I crossed them with my current career interests, it was clear that it was time for me to try a new experience and move on onto my next stint in the industry.

In the last few years my interests have evolved towards ”consuming” [resources and services] Vs. “building” [infrastructures]. This is something that has been close to my heart for a long time now.

Also, just like I have never been a “multi-hypervisor” type of guy, this “multi-cloud” thing hasn’t really warmed me up.

Long story short, the pivot to a leading public cloud provider with a strong personality and value proposition was becoming very appealing to me.

I started creating a short list in my head of organizations I would have liked to join. To be honest, I think there are just “two and a half” of them (I will not name names).

The output of a very well thought process is that I decided to accept an offer from Amazon Web Services for a Principal Solutions Architect role.

I have always been fascinated by the Amazon culture. There is some magic behind it IMO that I have always heard of and, at some point, I really felt the desire to live it from the inside. There are intimidating aspects of that culture but the fascinating aspects of it dwarf hands down any possible concern.

There are a couple of articles I suggest you to read and that fairly represent why the Amazon culture is, in my opinion, unique:

There are tons of such articles out there but I think these two capture my thinking fairly well.

I couldn’t be more excited to join AWS and see this from the inside being part of it.

As a last final thought, I am joining AWS with a (relatively) senior position at Principal level and I will bring as much “experience” as I can into the new role. After all, as Andy Jessy once said, “there is no compression algorithm for experience”.

Having that said, the graph below (source here) describes accurately the mindset I am starting this new adventure with. 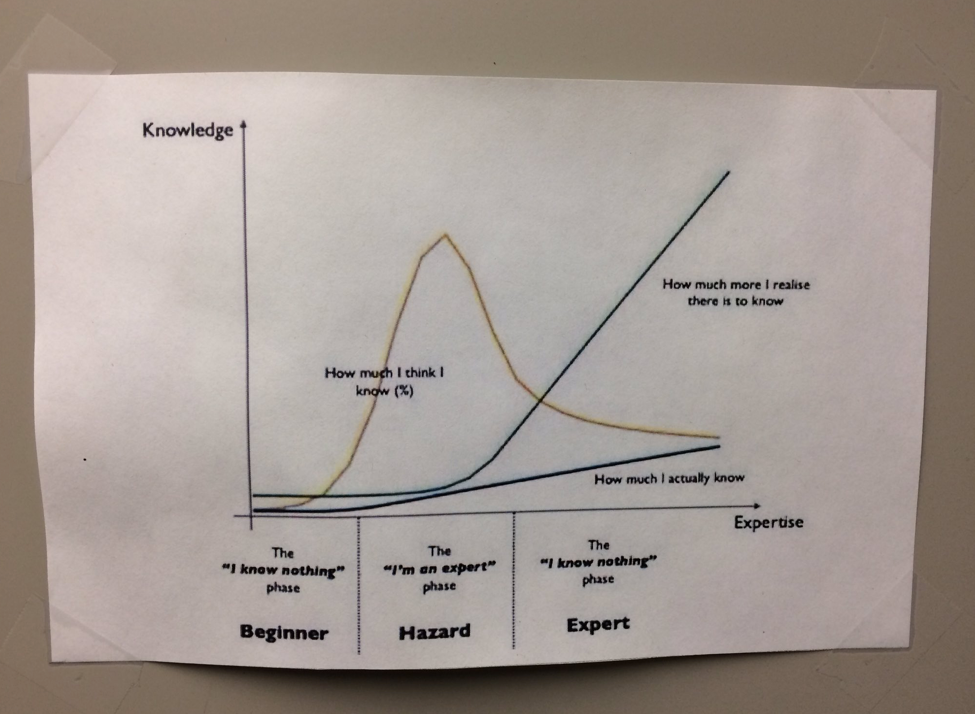 The more you live in this industry, the more you understand that what you know is a tiny bit of the entire universe that we are immersed in. There is no doubt why it’s always going to be “day 1”!

When I started talking about this to my (awesome) manager at VMware (Steve), I remember telling him that this opportunity is my “Cloud MBA”.

Saying that I am super excited to start this new chapter of my professional life is an understatement.

P.S. Ian Massingham ’s feedback to this post was: “You missed one critical aspect: Ian M literally would not stop nagging me to join". I know for a fact that he meant it, for real. That made me chuckle. I will take it as a token of appreciation from Ian.