Moving to a new role at AWS

I am sketching this post in early December (2018) on a train heading to Rome just a few days prior to interviewing for a new role at AWS.

Given this all happened in a bit of a rush and I did not have much time to chat with the stakeholders ahead of the standard interview process, I thought I’d leverage our “PR-FAQ” approach and share with them my “press release”. This includes my background, my motivations and how I intend to interpret this role should I be deemed to be a good fit in a few days. Fingers crossed.

If you are reading this post in public on my blog, it means I have a new job at Amazon. On February 18th 2019 (i.e. today) I will be joining the compute service team at Amazon Web Services as a Developer Advocate for containers in the organization led by the one and only Deepak Singh.

I spent the last 25 years (circa) working with IBM, VMware and, since October 2017, Amazon Web Services. More on this progression later. I joined the Solutions Architect function as a generalist SA roughly 14 months ago working with a specific set of (awesome) customers.

As I started to reflect on what the next steps of my career should be, it was clear that I had a couple of vectors I needed to figure out: the role I wanted to pursue and the domain (or the technology perimeter) that I wanted to focus on.

In the last 25 years I realized I have always been (I think) very good at working with customers 1:1 on innovative services, products and technologies; yet (I think) my superpowers are more around:

I have always found myself at ease being that trait d’union connecting different personas such as customers, product managers and marketing managers. This is why I believe that the latest roles I had at VMware, as a Technical Product Manager and Technical Marketing Manager, were more aligned to my superpowers.

All of this above translates into an evangelist / advocate role at Amazon so I had my new (aspirational) role figured.

While picking a role was (relatively) easy, picking a domain was more challenging. The awesome thing about being in a generalist role is that you feel like a kid in a candy store and you get to work on everything that you want (or better, that your customers need). However, I had to find a proper compromise that would allow me to keep learning new things (a priority for me) while being able to focus on a narrower set of technologies and services that would allow me to dive deeper.

As I mixed in a virtual blender my background and my interests, it became fairly clear that gravitating around the “compute” space at AWS would give me the opportunity to both leverage my experience and background to be more impactful in the organization as well as keep learning a lot of new things.

Evangelizing and advocating on the compute options is something I have already been doing at AWS in the last year. For example, this is a picture from a blog post I published a few months ago: 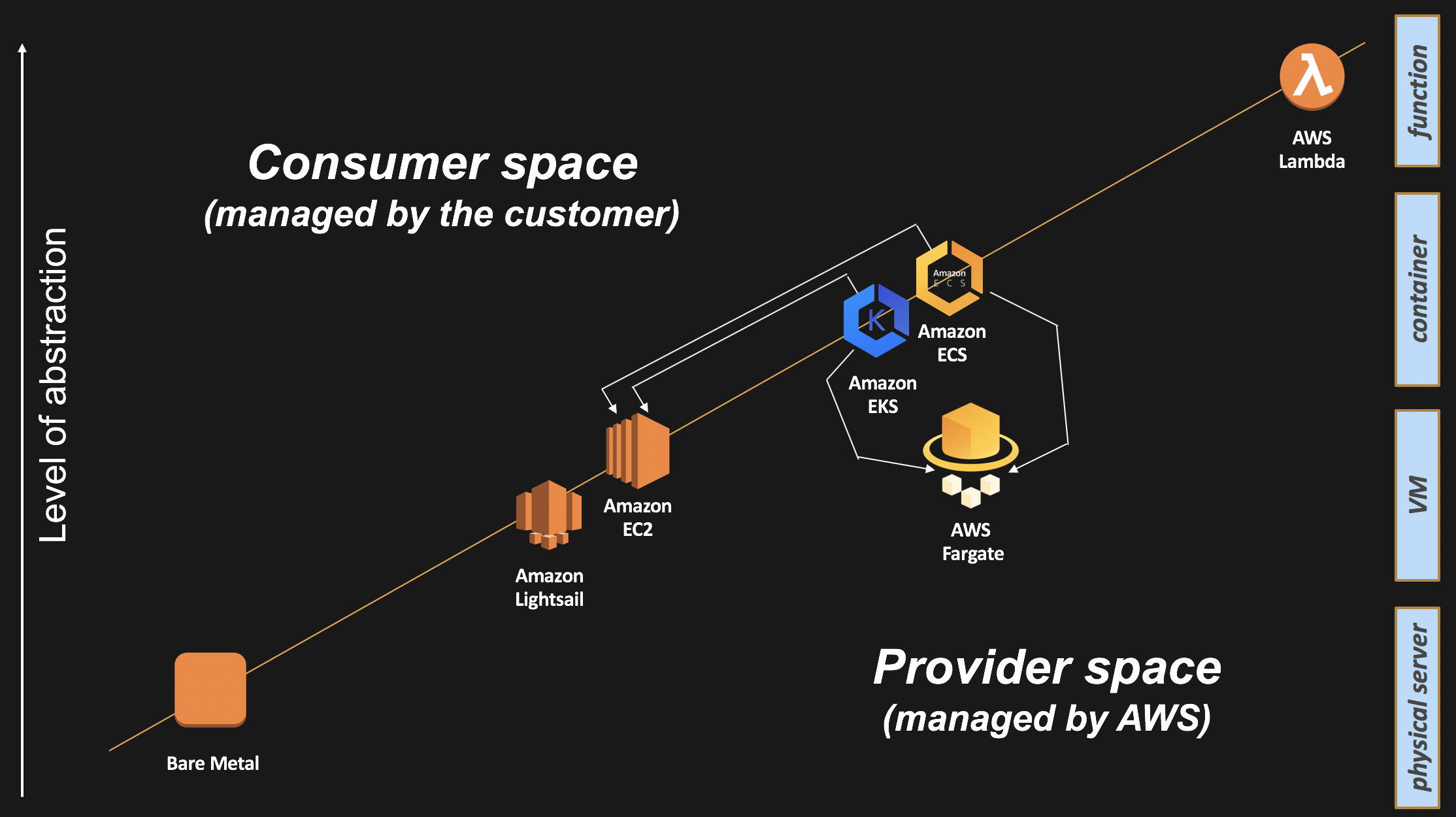 In retrospect, this picture may have a lot more (personal) insides compared to what it was originally intended to communicate in the first place. Other than representing my area of expertise and experience at large, I have just realized it also represents my career progression. This is how I am looking at the picture right now: 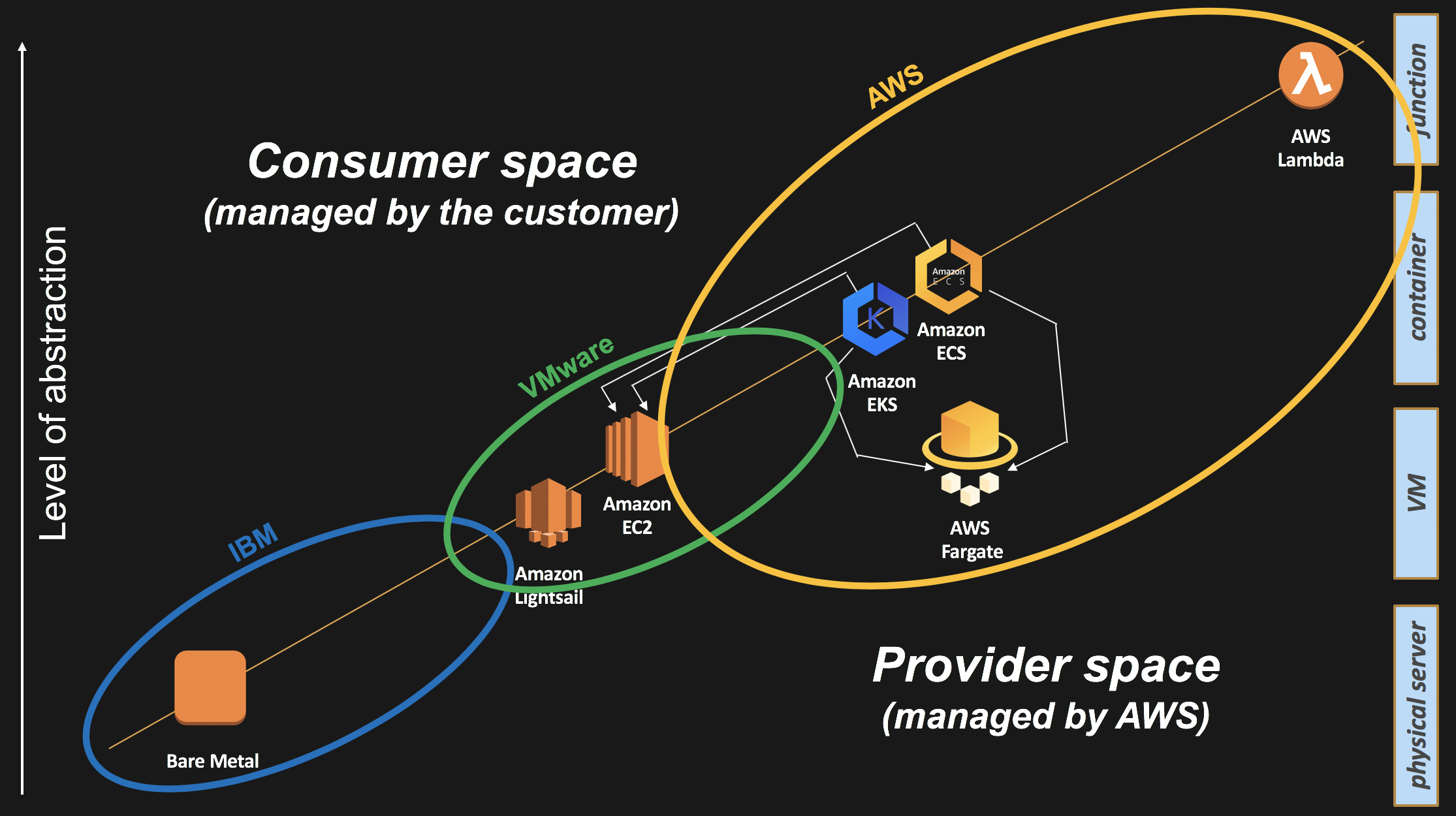 IBM is where it all started 25 years ago. At that time, I was working with physical servers and I started playing with VMware (ESX 1.1) and the concept of virtual machines.

VMware is where I moved on and focused on VMs first and IaaS later for a number of years and containers for the remaining 2 before leaving to join AWS.

The next obvious progression for me seems to be to start from where I left and double down on containers in a much broader way.

This definitely doesn’t mean I will not work on other stuff. On the contrary:

And again, given I like visuals, this is how I see my time being spent on the different domains that map to all AWS services given this change in role: 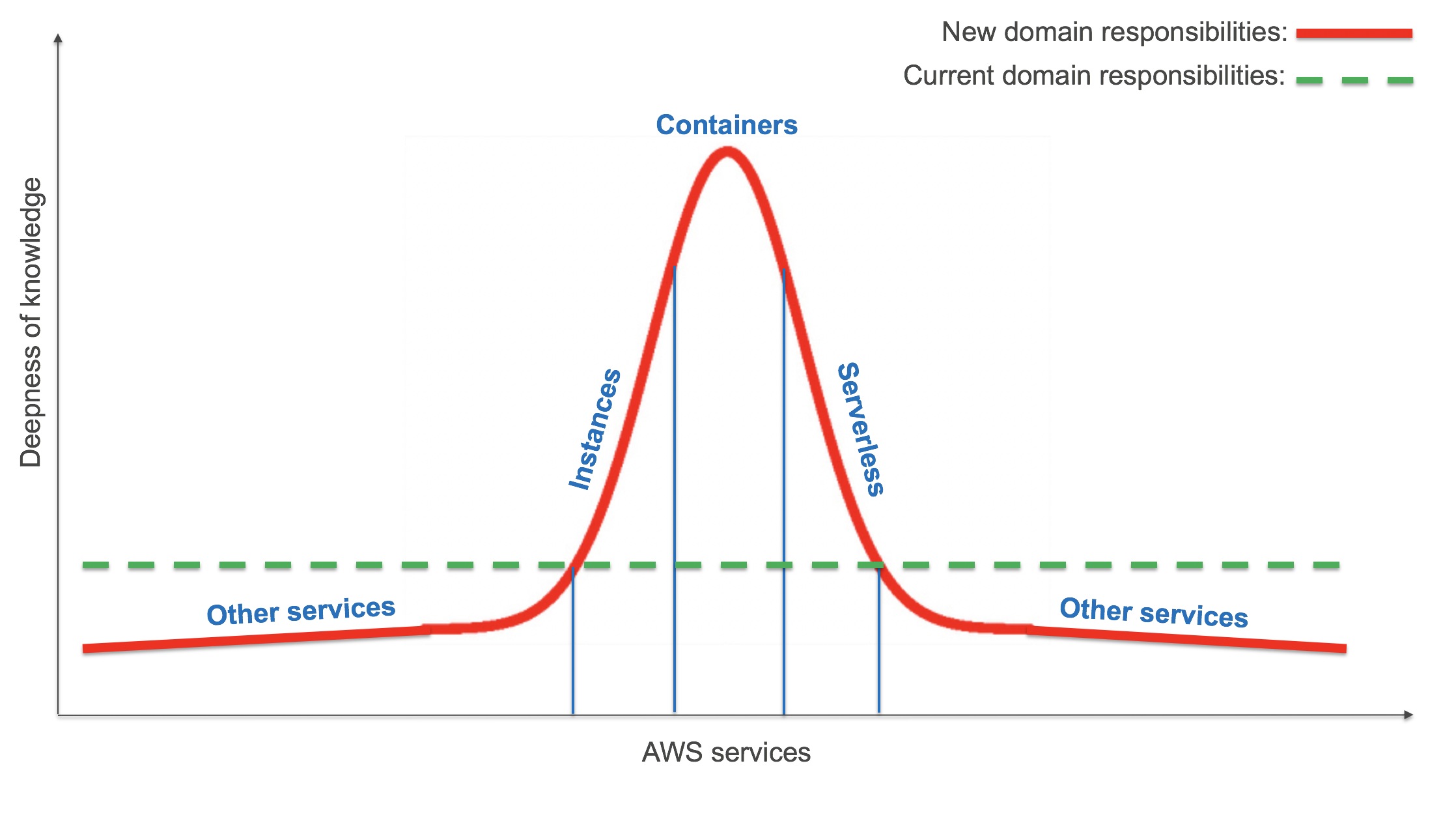 Containers aren’t the end state but they are truly in the middle of the action right now.

I am obviously super excited to start this next leg of my career.

In 20 years, I may be in the unique position to tell my grand-children that I have seen all major IT industry transitions from bare metal, to hypervisors, to containers, to serverless and to what’s coming next and we don’t know yet!

See you out there.