Taking a New Challenge: Cloud Native Apps (Whatever That Means)

Two years ago I joined the VMware Cloud Services Business Unit working on vCloud Air because I sensed there was a shift going on in the industry. I referred to that change as a growing personal interest to learn more about how to consume IT Vs. how to build IT.

I still very much stand behind that statement as I think, to make a parallel, it is more interesting to leverage electricity than it is to produce it.

In the last couple of years I have been focusing on cloud APIs consumption and automation. This wasn’t easy for me as I have a standard infrastructure background. Yes you can think of me as a “GUI person”. But, damn, I wanted to change that.

I went through jokes (always fun to work with my colleagues), and disillusions. In the end I only hope that the amount of output I produced in that capacity has been at least as big as the amount of information I have accumulated in the learning process.

As time went by I felt a growing desire to make a further step forward and explore new technologies and concepts. Whether I was intrigued by the unknown or whether I was sensing another industry shift I don’t know but it became clear to me that alien concepts like “containers”, “infrastructure as code”, “cloud native applications”, “DevOps” and such were stuff that I wanted to get more intimate with. In the past few months I have started blogging about some of these stuff (this blog post “Cloud Native Apps for Dummies” was quite well received and got some good feedbacks) and I wanted to focus on it more.

Long story short, I am starting my new adventure at VMware as part of the newly formed Cloud Native Applications Business Unit. Title is still TBD. I may eventually turn to this site to figure it out:http://www.samdutton.com/stupidJobTitleGenerator/.

While we are at this, there was a very funny tweet a few weeks ago made by a parody account: 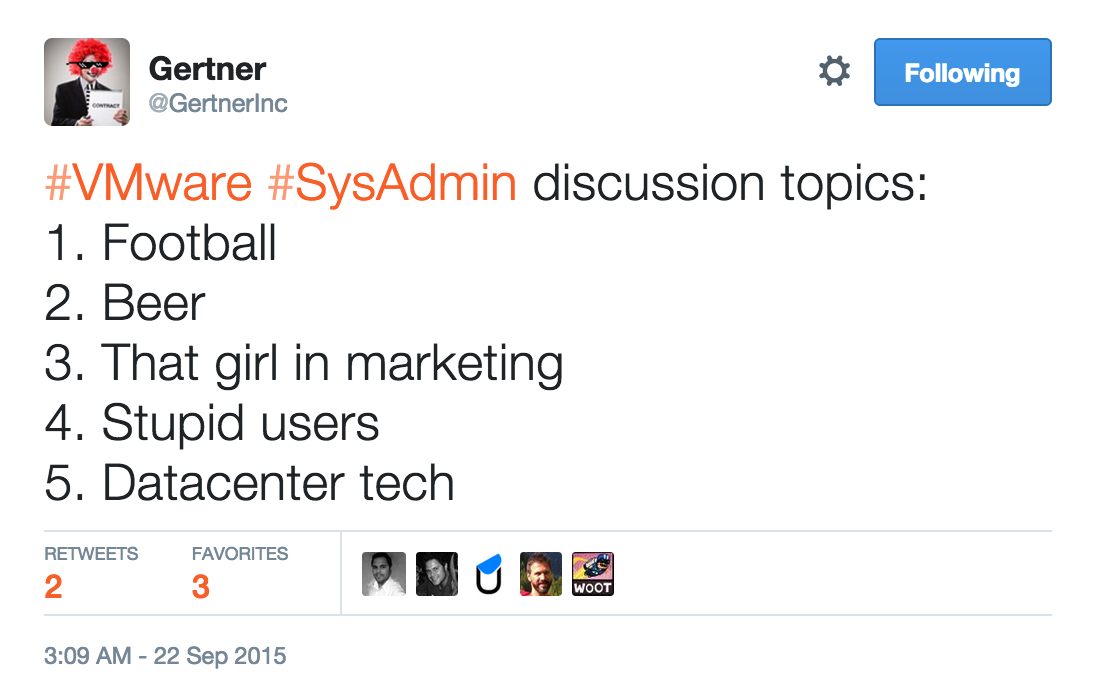 If you believe (and I do) that software is eating the world and if you believe (and I do that too) that developers, and the business in general, are becoming more and more key in driving technology decisions then you really need to go beyond “Stupid users” and “Datacenter tech” as our friend put it. This parody account just made a serious tweet. He has a point IMO.

During the VMworld 2015 keynote I tweeted the following:

This got quite a bit of attention (in terms of likes and retweets). It was even mentioned by VMware’s own CMO Robin Matlock (see minutes 4.30 to 5.30 of this Cube interview). That was kind of funny and also shows the power of social media by the way.

Now I will admit that that tweet was a bit of an hyperbole and an exaggeration but, guys, I think we need to move on, and by that I just mean that we need, again, to go beyond “Stupid users” and “Datacenter tech”.

It is not (yet) the “sky is falling” type of scenario. If you look at the industry as a whole the “legacy” world still generates like 4 Trillion US Dollars whereas the “new world” is probably generating a few dozens Million US Dollars. Yes, peanuts. There are also companies that are valued more than $1B and generate $0 in revenue (which is quite interesting but mostly funny).

While it is largely by personal interest that I am joining the new team (and not because of the fear of being job-less in 5 years), I still believe that the (IT) world is changing. I made a similar rant exactly one year ago at the end of VMworld Europe 2014. That argument still has legs this year. Even more so I’d say.

I am approaching this opportunity in a very humble way. There is a ton I need to learn, and I am determined to learn it. That excites me, a lot.

In a way this is my little “stay hungry, stay foolish” way of living (well, ok, compatible with me having a family and a mortgage).