I believe there is nothing like using a technology (or a solution) from an end-user perspective to really appreciate it. That’s what this series of episodes is all about.

A little bit of background: back in November last year I was approached by a UK based VMware hosting partner called Stratogen. They have seen my blog and offered me an opportunity to enroll into their vCloud Director beta program since they were looking for users that could, quoting them, “really put it through it’s paces”. That turned out to be a busy period for me so I didn’t have too much time to start exploring that. I have recently been able to enroll and this series of posts would like to give you my perspective as an “end-user”. Hopefully there is going to be more than one post, assuming Stratogen won’t kick me off from their cloud any time soon.

Most of the time, when playing with cloud technologies (be it in the lab or with our Service Provider partners or with Enterprise customers) I play the role of the cloud administrator. I thought it would be interesting to play (and document) what the life of a vCloud Director end-user looks like. Sure you can play the role of the end-user being a cloud admin as well, but there is nothing like not even being tempted to look at what’s going on in the backstage from an admin perspective. I want to just be a “consumer” this time. That’s what Stratogen offered me: I don’t have any access to their backend systems (obviously), I just have my own cloud sandbox to play with.

In the real life the reasons that may drive you to approach Stratogen or any other vCloud partner may be different. I am not going to open up a discussion regarding why you would want to go on a public cloud vs expanding your local infrastructure (be it just “virtualized” or at “private cloud” state-of-the-art).

So on November 29th 10:17 AM I sent the info Stratogen required to get me on-board. On the same day at 12:01 PM I received back an email from Stratogen informing me that my cloud sandbox was ready and waiting for me. The mail included all the info I needed to start consuming my assigned capacity in the cloud:

I thought this was pretty darn good as it took me just 104 minutes to get my capacity ready to be consumed. Note that this is not the time it takes every time you need to deploy a workload! More on this in future posts. This is the time it took me to “contract” with Stratogen to get access to a certain amount of resources in their public cloud offering. It’s a one-shot operation to on-board into their cloud. Could Stratogen do better than 104 minutes? May be they could but… I wouldn’t care as an end-user, really. Compare 104 minutes to how long it would have taken your vendor of choice to ship capacity in the form of discrete physical servers (and storage… and network). That’s usually measured in weeks.

So what do you do next? You just fire up your browser: 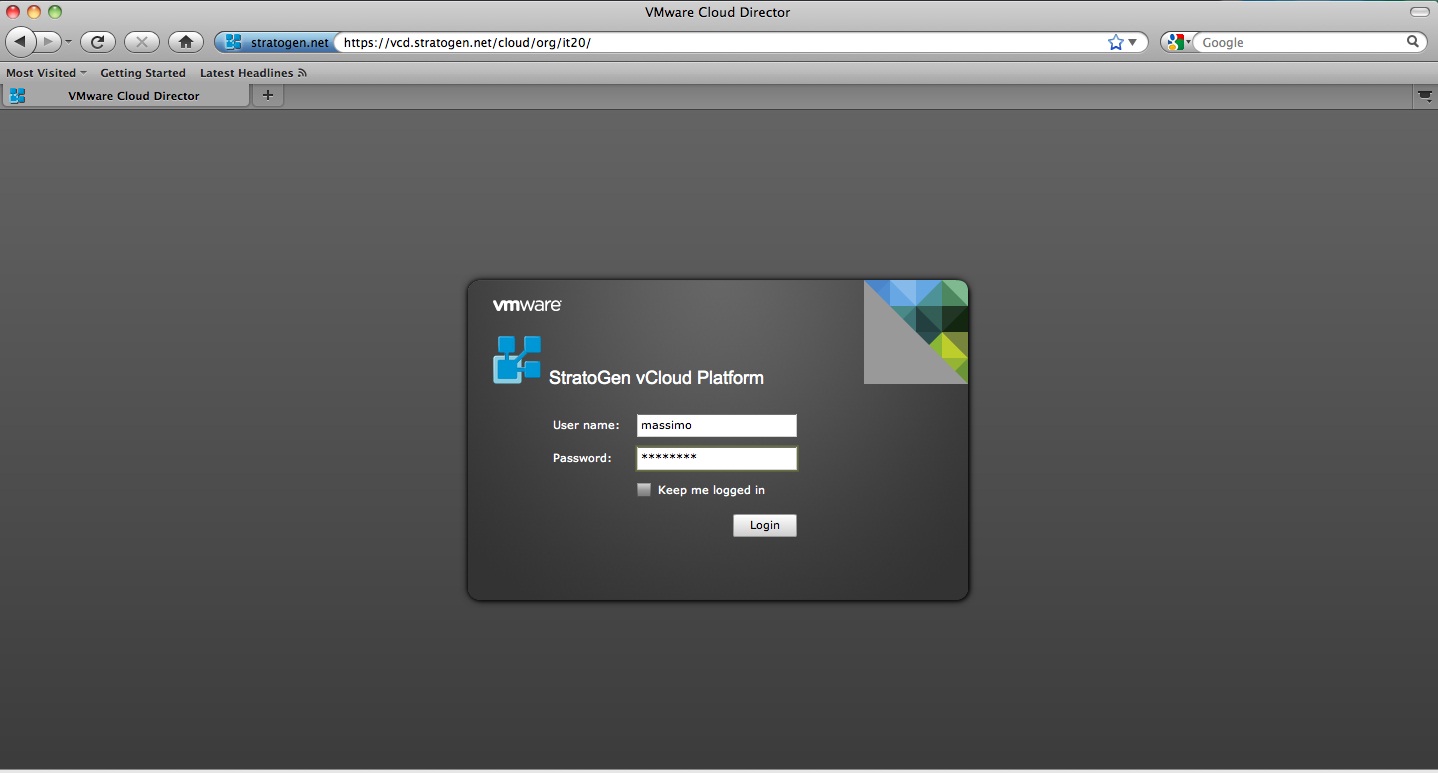 And here you go. This is your cloud sandbox: 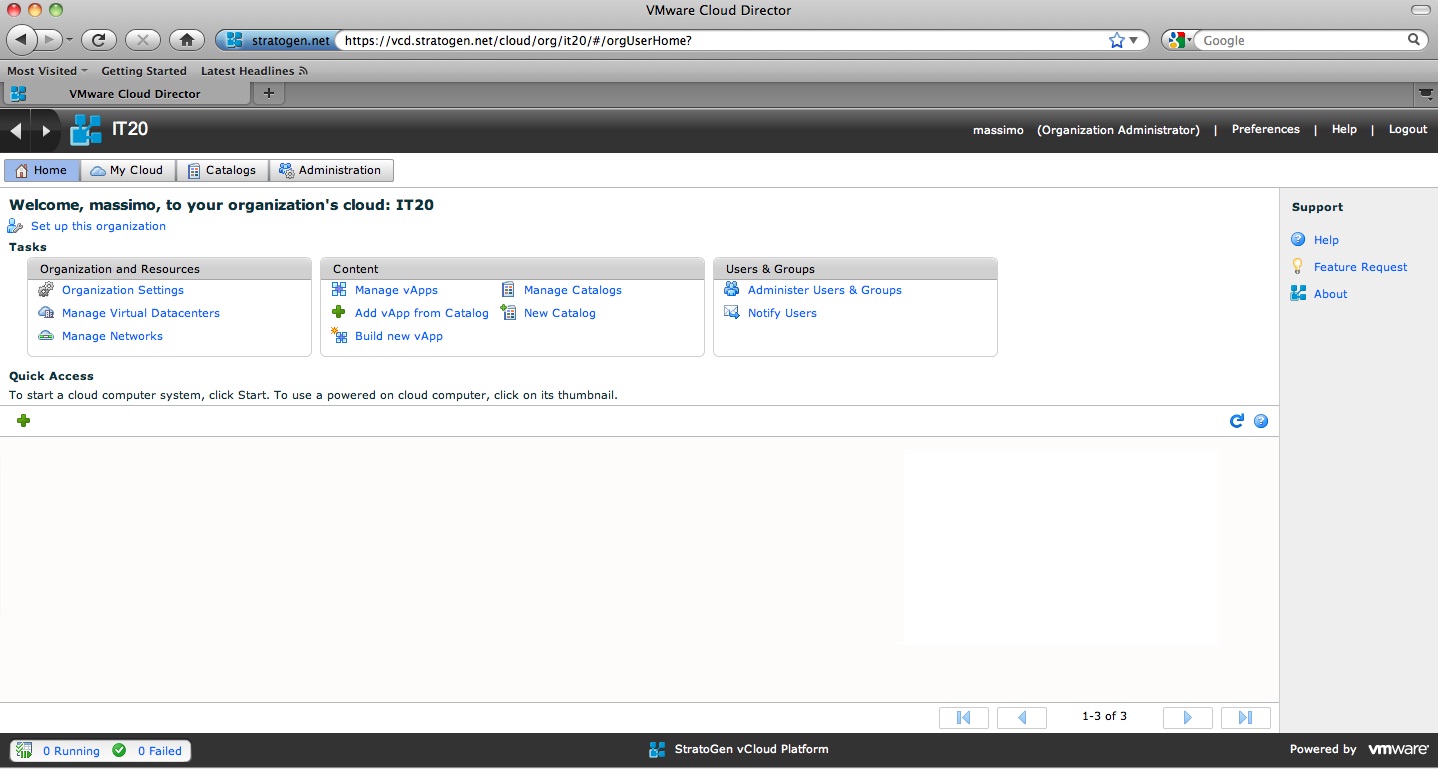 Let’s start navigating through some key menus just to explore what Stratogen made available to me.

In terms of compute capacity, this is where I see my 12GHz of CPU, 16GB of memory and 220GB of disk space that I have subscribed to. 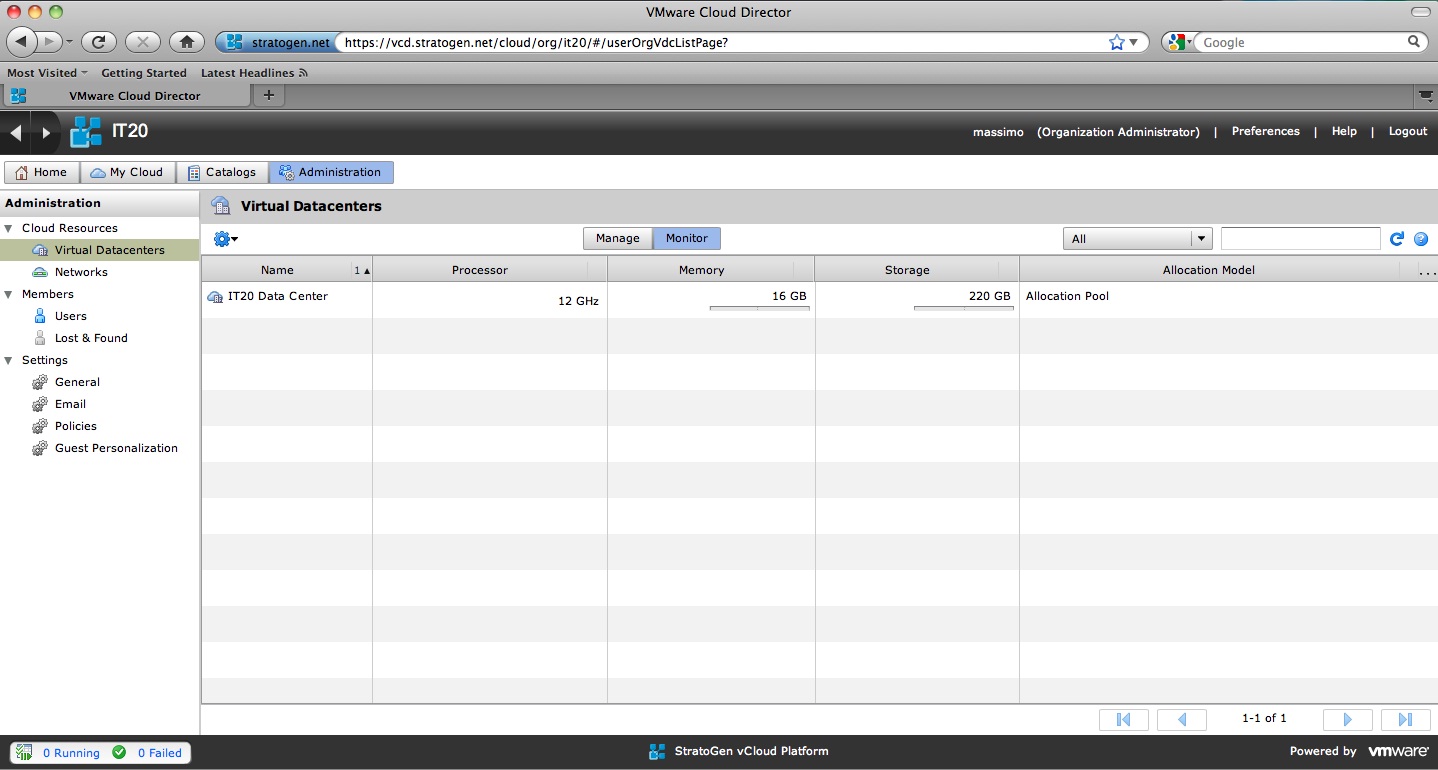 Note that this Org vDC (named IT20 Data Center in this screenshot) has been subscribed using the Allocation model. With this model Stratogen is able to oversubscribe the Provider vDC resources. I don’t know how much of that allocation is reserved to my Org (I am not the cloud admin so I can’t see it!) but I couldn’t care less for my needs. In a real life scenario you may want to have your Service Provider to disclose that piece of information too (or decide to subscribe with a Reservation method).

And this is where I see the user(s) entitled to access this sandbox. Since this is a pristine environment you only see the user Stratogen created to manage the IT20 organization. In future posts I’ll try to show you how you can create Org users with different roles. 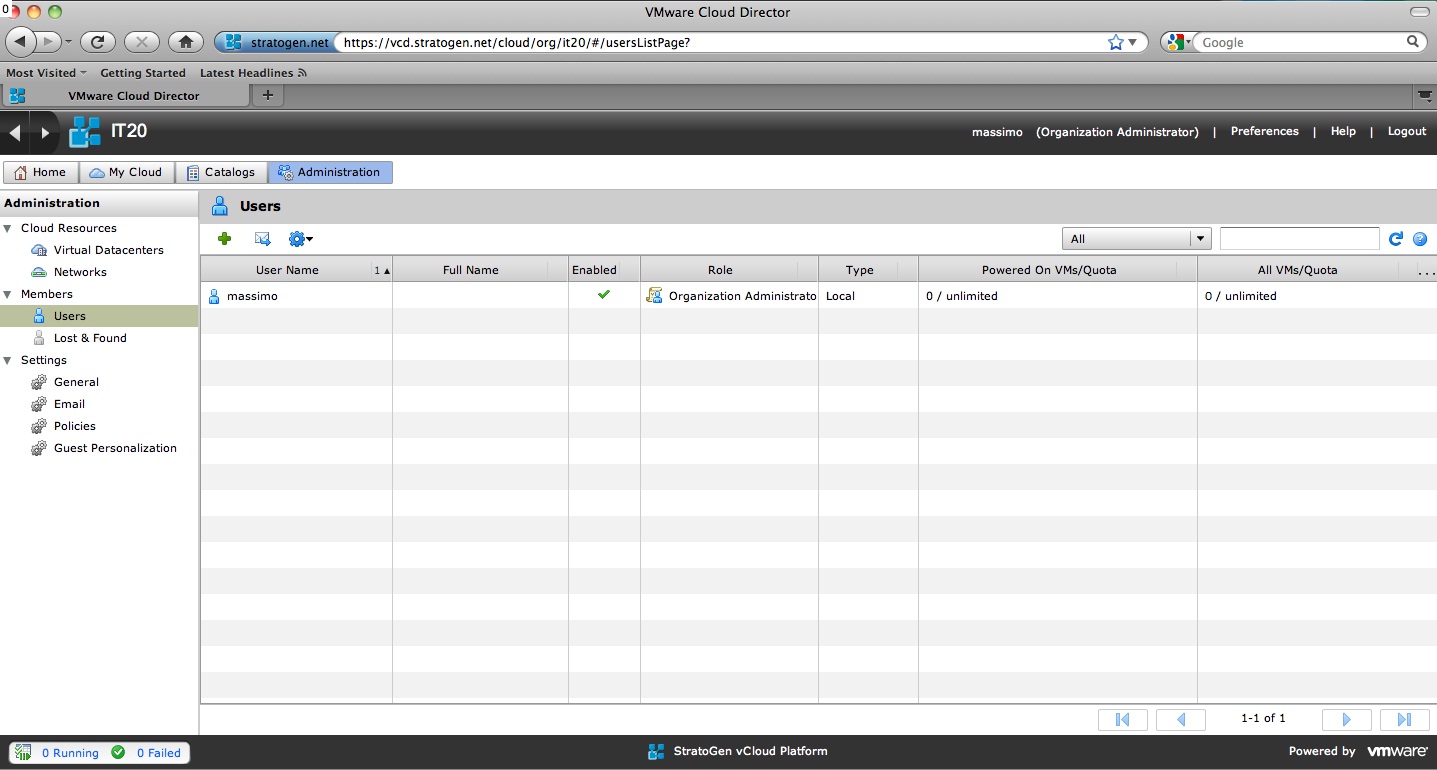 Before we get to the fun part (networking) I’ll show you something equally interesting.

vCloud Director allows my organization (IT20) to manage local catalogs. So far I don’t have any since this is a brand new Org that I haven’t yet used. However Stratogen makes available to their customers a global catalog that they maintain and publish with pre-installed vApps. In a way this is a sort of Stratogen vApp Store if you will (I hope Steve Jobs won’t sue me for this). 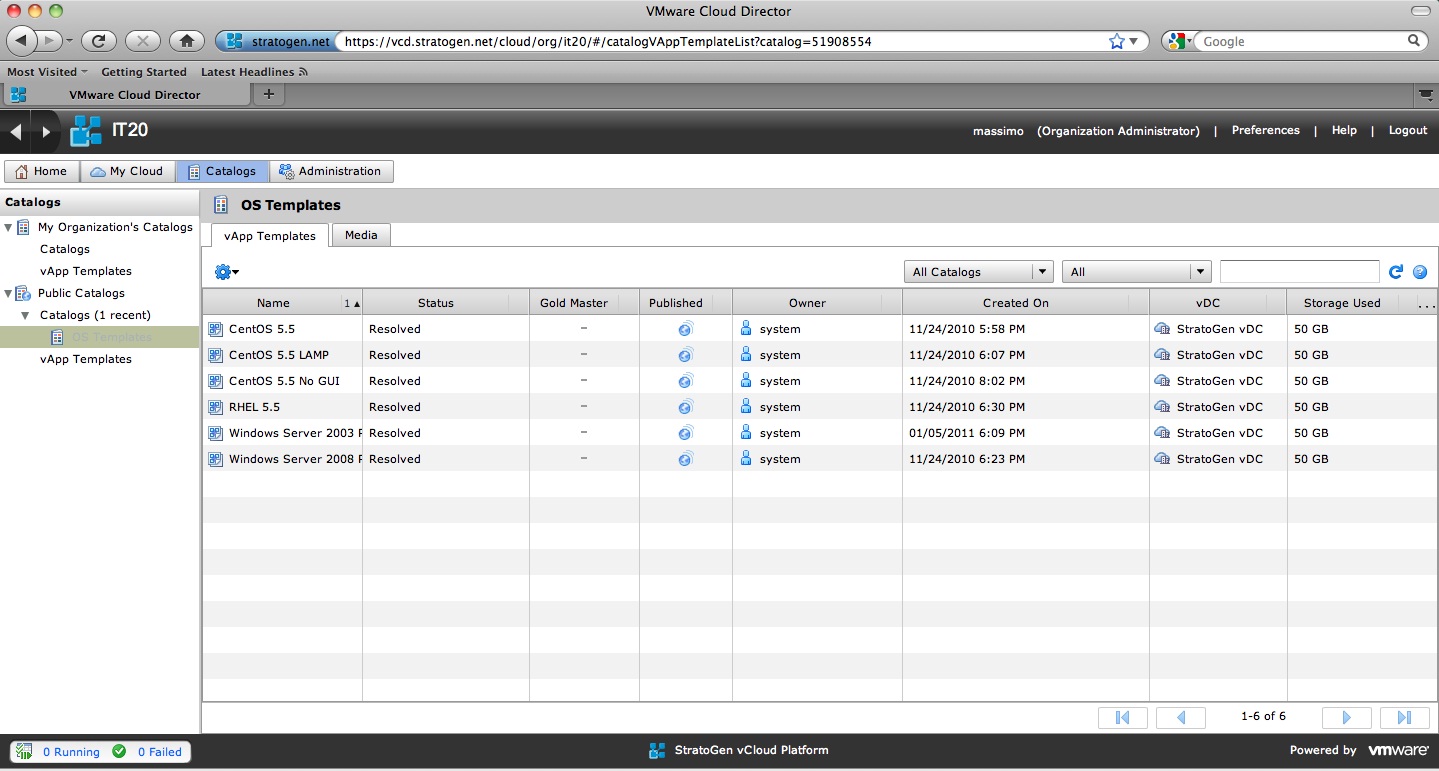 At the time of this writing this catalog contains vApps pre-installed Guest OSes (except a LAMP stack in one of them I see) but nothing would stop Stratogen to publish real applications for cloud consumers to buy. See some interesting vCD Public Catalog (business) use cases in a previous post of mine if interested.

And now, as promised, the fun part. This is how the networking layout (as provided by the Stratogen cloud admin) looks like: 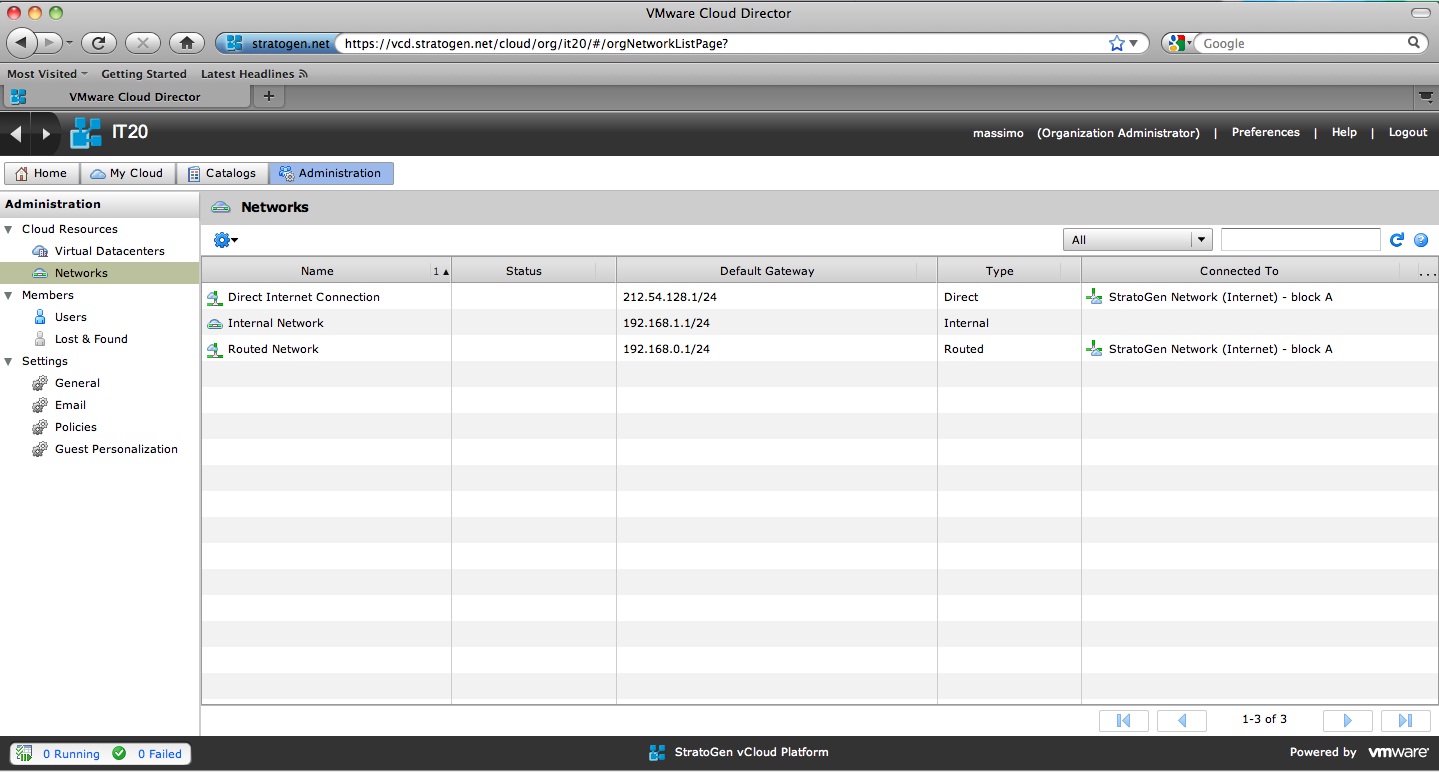 More specifically this is how the Internal Network configuration looks like: 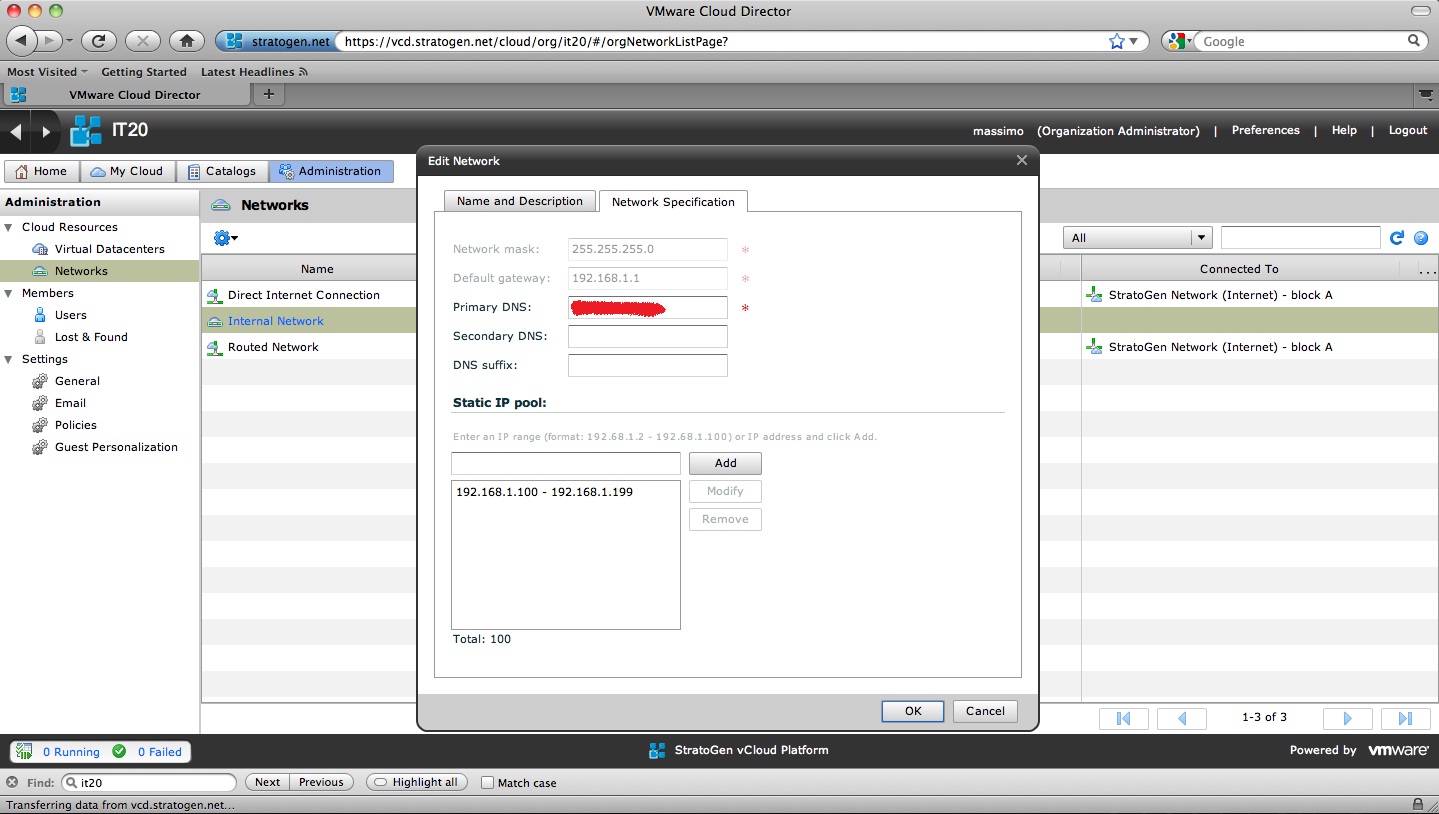 Stratogen configured a class C network (192.168.0.1/24) segment that IT20 “owns”. In essence a dedicated layer 2 segment that has 254 usable (internal only) IP addresses that my organization can use at our will. 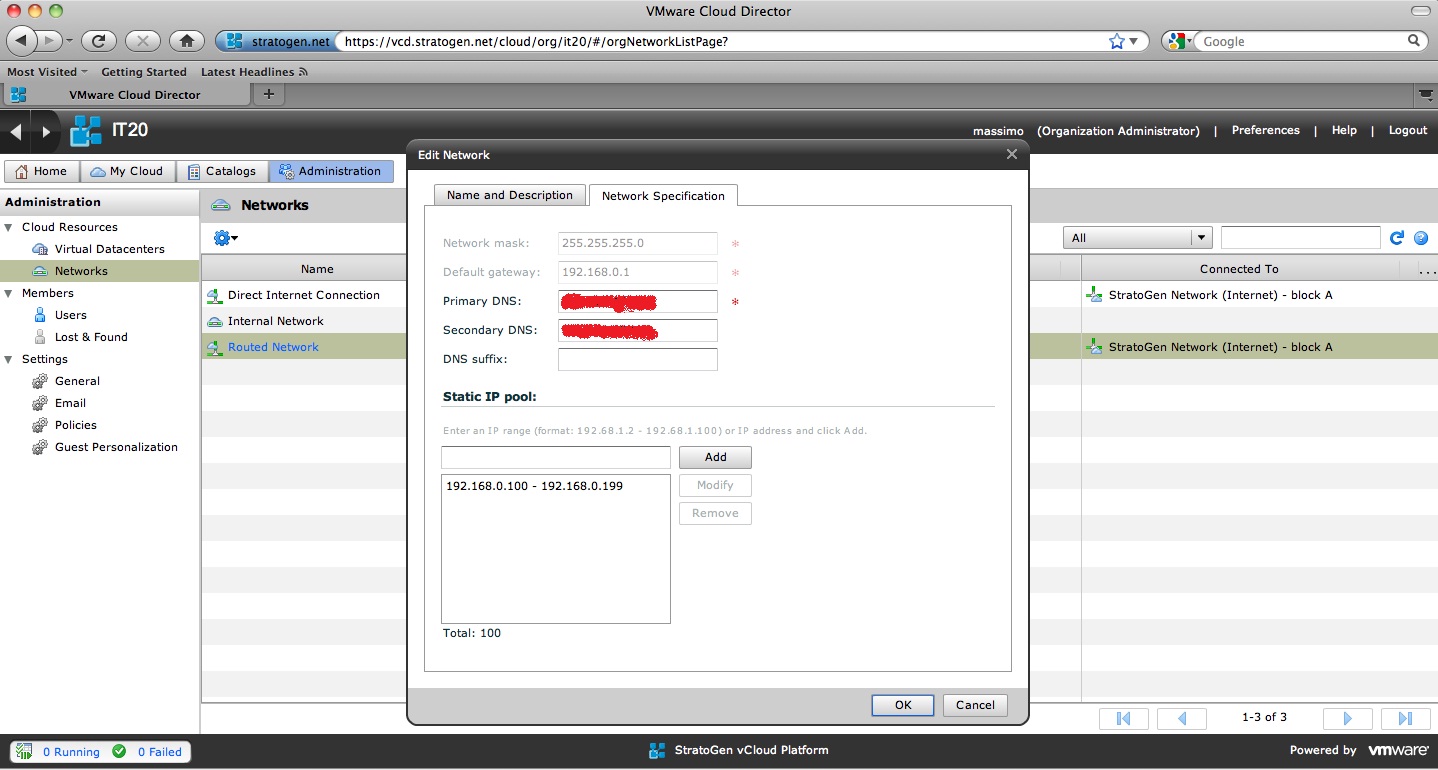 Same thing here. Class C with 254 usable IP addresses. The interesting thing here is that all these addresses can connect to the outside world (the Internet in this case) as they are NATted by the Edge device. In addition to that Stratogen also provided us with 4 Public IP addresses (Internet addresses) that we can use within our sandbox (in full self-service mode) to create in-bound NAT rules so that public internet addresses can reach (up to) 4 of our internal VMs sitting on this NATted layer 2 segment. 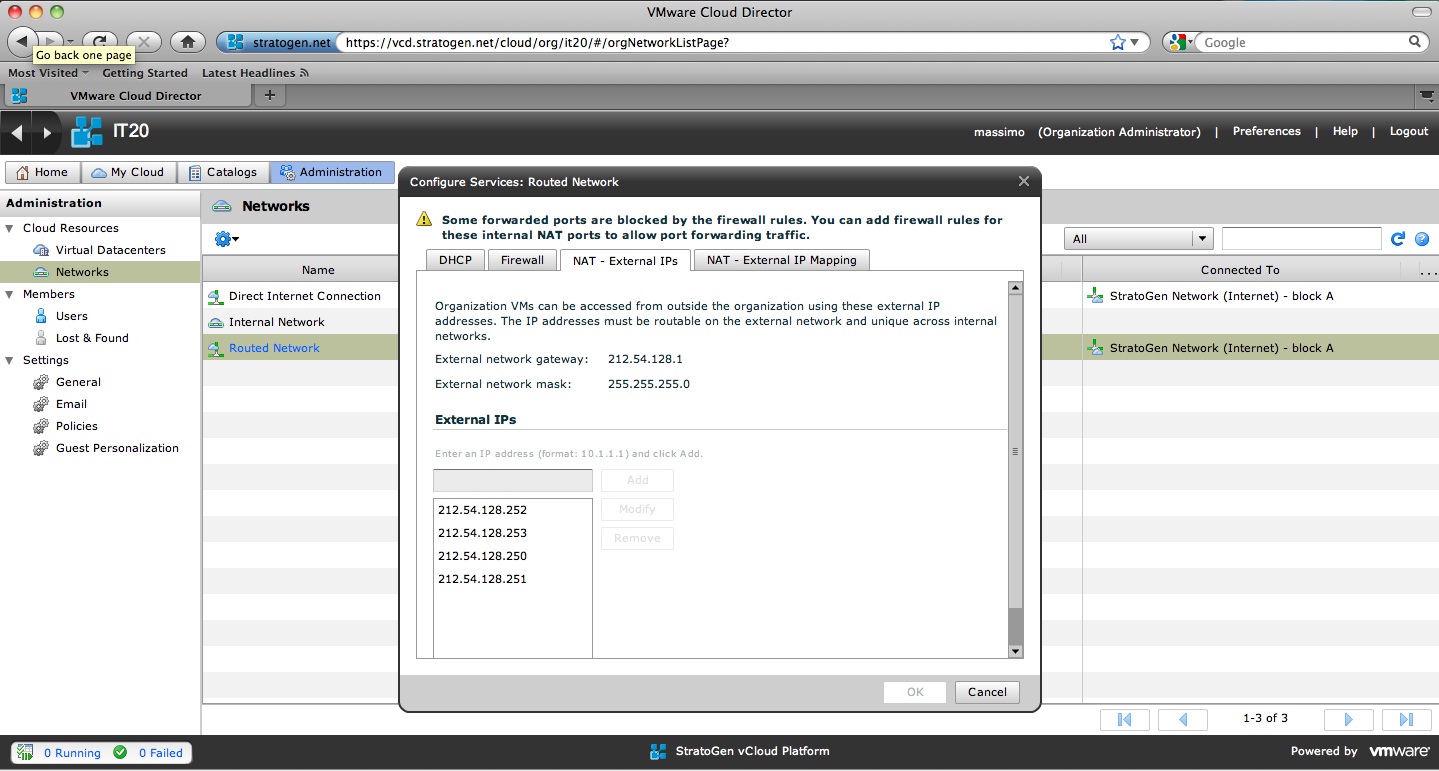 From within this window (in the NAT - External IP Mapping tab) you can assign these Public IPs to any of the internal private IP addresses (192.168.0.1/24).

For the moment let’s forget about the characteristic of the Direct Connect Network since it’s probably not going to be common to have a straight internet connection like this in real life scenarios.

As promised, in this post I just wanted to give you the end-user experience during the on-board process of an IaaS cloud subscription. In future posts (if time allows) I want to discuss how you can actually consume the capacity subscribed and possibly more advanced configurations and scenarios. This will include some cool federation and hybrid-cloud technologies we will be coming out with (can’t wait to talk about those).

In summary I have on-boarded on the Stratogen VMware based cloud and I now have available:

But the cool part is that it took me just 104 minutes to get all this! That’s cloud!