The Cost of Doing Public Cloud with VMware

Very often VMware gets compared to the Ferrari of cloud computing whereas AWS gets compared to the Ford. Others describe this as “Enterprise” Vs. “Commodity” clouds. While VMware tends to proudly take this as an esteem of the value you can extract from the software, people usually refer to that meaning that VMware based clouds are expensive (compared to AWS being cheap).

I have recently been working with Aruba Spa, a big EMEA hoster (and now cloud provider) whose HQ happens to be in Italy. I’ll let their numbers speak for them:

These guys know how to operate at scale.

I am not going to say anything that is not publicly available. What I am saying that is not on their public web site can be considered my own speculation and analysis. This cloud offering doesn’t use vCloud Director. However we are discussing with them the value that opening up Cloud.it to the hundreds of thousands of VMware customers looking for a hybrid cloud scenario could provide. Aruba is a VMware VSPP partner.

Note that the VSPP program would allow Aruba to use vCloud Director at no additional cost. Hint hint.

The Aruba Cloud Computing division is currently developing in house their own cloud management stack and they are supporting a couple of virtualization stacks: VMware vSphere and Microsoft Hyper-V. Aruba has two variants of the Hyper-V offering. One is based on reserved resources and the other one (low cost) is based on resources that are shared and oversubscribed. Note that it was an Aruba decision to not provide a VMware offering based on shared and oversubscribed resources. I may personally state that vSphere could handle oversubscription better than Hyper-V but this is not relevant for the nature of this blog post.

Similarly we may argue the Aruba positioning of the various offerings (which hypervisor to use with which guest) but ultimately Aruba is in a position to offer and position their services the way they think it is better for them without having to consult with VMware.

The following picture, available on their site, shows the high level architecture of their cloud environment, which includes the vSphere platform and the two Hyper-V platform nuances: 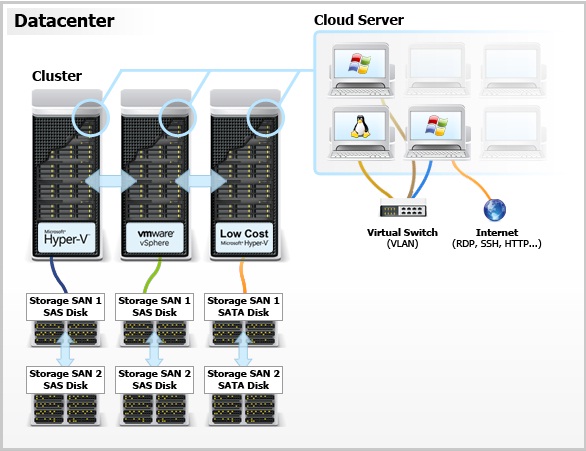 I have been working with them at the time of the beta launch so we didn’t discuss too much the go to market and pricing strategy. Those discussions were still in flight within Aruba at that time.

Long story short, the other day I was browsing their site and I was about to call them to report a typo in the decimal mark on the public price list.

I want to stress that what I am trying to argue below is not that Aruba is dirty cheap. Instead the point I’d like to make is that even an Enterprise class service can be offered at very good prices if properly operated at scale.

To do so I am going to compare, at the very high level, the AWS prices (a benchmark many are using when doing cloud costs comparison) with what Aruba is offering on their cloud platform (I am not going to consider the Aruba oversubscribed offering because it would be an apple to orange comparison to AWS).

First note that AWS lists EC2 prices on an instance basis. I am pointing to the AWS EU data center because that is where Aruba has its facilities:

That means that to make a like for like comparison we need to focus on an AWS instance type and build a comparable Aruba VM.

To make the comparison I started with the AWS simple monthly calculator and I did something very simple: I configured a small Windows instance in the EU datacenter with a 160GB EBS and projected its cost at 30 days with 100% utilization.

The following two pictures show that process and the result:

Note we will need to normalize prices to euro (the AWS prices are in US Dollars).

I then did the same on Aruba’s web site. I went on the Calculate the Cost of Your Cloud page and I configured a VM that could resemble as close as possible the small instance on AWS that I have just created.

The following picture shows the cost for a vSphere-based virtual machine: 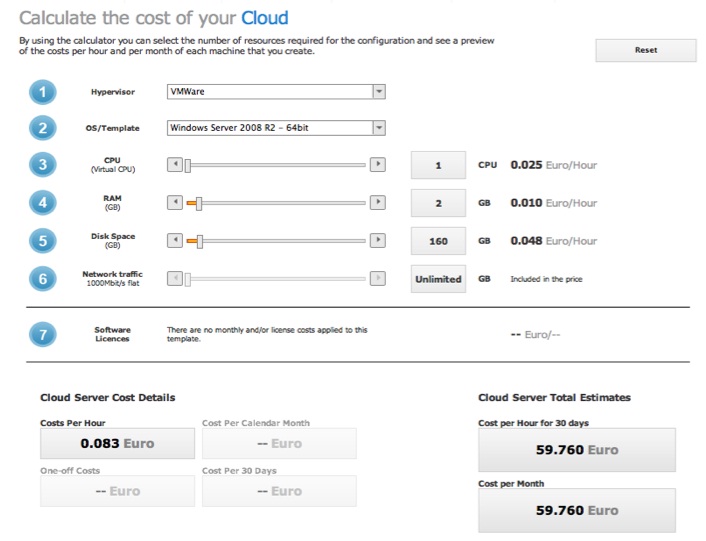 The following picture shows the cost for a Hyper-V based virtual machine: 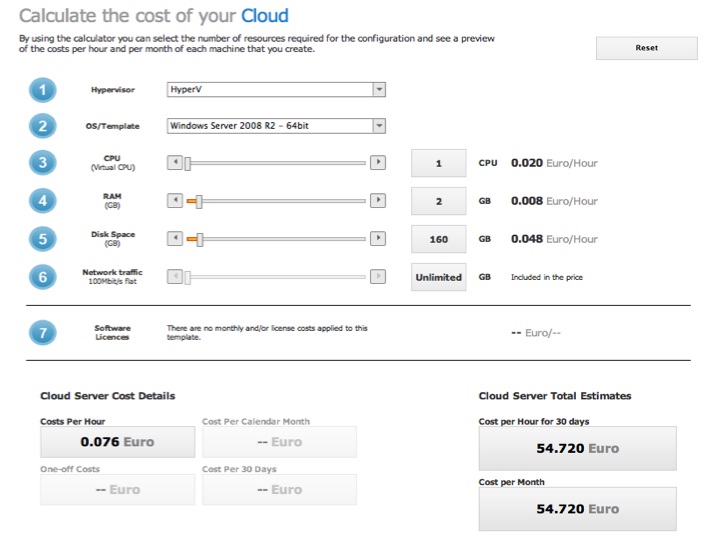 And this is the summary of the findings for an AWS small instance:

Below is the graphical representation of the comparison for an AWS small instance. 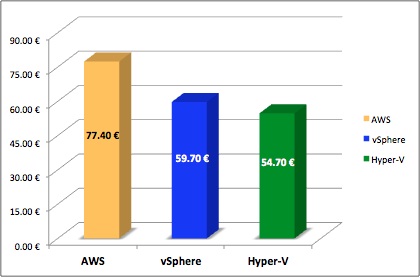 For an additional data points and to validate the results, I ran a similar comparison for other virtual machine configurations.

This is the summary of the findings for an AWS large instance:

Below is the graphical representation of the comparison for an AWS large instance. 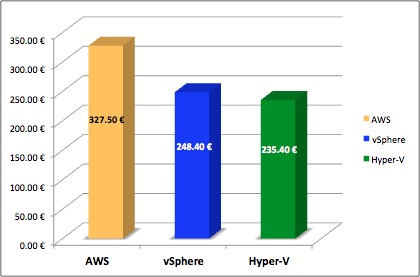 It is interesting to notice that, as the configuration of the virtual machines gets bigger, AWS starts becoming more expensive. It must be noticed however that Aruba Cloud Computing only allows instantiating virtual machines with up to 32GB of memory.

Also note that this didn’t want to be a real price comparison analysis as I am sure there are other services that are already included in the Aruba Cloud Computing platform but use a PAYG model in the Amazon AWS world. This would make the price comparison even more favorable towards the Aruba service, if confirmed.

The last thing that is worth calling out is that Aruba Cloud Computing is built with Enterprise hardware components. They use Dell PowerEdge servers and EqualLogic storage as mentioned in this Aruba KB (in Italian only).

In conclusion, the net of this post is that you can do Enterprise cloud computing leveraging VMware vSphere software and yet beat AWS on price as the Aruba’s Cloud.it service is demonstrating. The other interesting outcome of this high-level and brief analysis is that, everything being equal, Hyper-V based virtual machines on Aruba Cloud Computing comes out being only 5 to 10 percent cheaper than VMware vSphere based virtual machines. Your call.

Now imagine to layer vCloud Director, at no additional cost, on top (or on the side) of this very efficient cloud backbone at scale and you can imagine the hybrid cloud opportunities Aruba may be able capture.